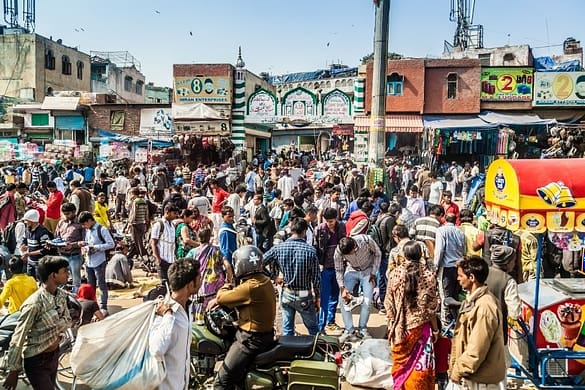 The bazaars in Delhi can be clearly distinguished between the newer ones and the old ones of Old Delhi. Many like to start their shopping journey with the conventional markets filled with numerous shops where it is possible to find almost anything under the sun. Some sell only utensils, while the other deals in jewelry. Plus, there is one market that is renowned for zardosi and embroidery.

Delhi means so many things to many people, and irrespective of what conceptions they might have about the city, Delhi is loved by all. One of the many features of Delhi is that it has always been a shopper’s city. You can discover the accurate colors of India in the Delhi marketplaces. They’re crowded yet lively and rejuvenating. While passing through the multitude of lanes and streets in various parts of the old city one can experience the real enjoyment of shopping. In fact, many backpackers visiting Delhi like to spend their entire vacation shopping.

Given below are some of the bustling and colorful markets, specifically from the Old Delhi region:

This old market, dating more than 300 years has attracted attention since its origin. As Emperor established Shahjahanabad, Chandni Chowk came into existence right opposite to Red Fort. It runs through the old walled city and still houses the shops and eateries that have been running from multiple generations. It is said that in the old days a canal named Faiz Nahar ran through the market. It is the first place that you’ll think about when the topic of discussion is shopping in Delhi. The name is derived based on the fact that moonlight is reflected by canal’s water. Some also believe that the market was built following a design of a half moon. Apart from the numerous shops, it is additionally home to the revered Sunheri Masjid and Digambar Jain Temple.

No matter which day of a year you visit the market, Chandni Chowk is always bustling with people and shopkeepers. Its very essence is the variety of the items and their typical Indianness. From authentic Indian food, delicacies and sweets, to beautiful hand-embroidered chikan and zari saris, you can easily find what you are looking for. There are many stores selling leather goods, clothes, shoes, books, antiques and other consumer goods.

It is also among the oldest markets in the city and just a few minutes’ walk away from Red Fort and Chandni Chowk. Its narrow lanes and congestion identify this marketplace and it is a thriving commercial center as well as among the most active marketplace in Delhi. There are a variety of things which you can buy here like hardware and iron, copper, stainless steel utensils, and brass utensils.

It is among the most chaotic places in Delhi and is given the status of the biggest wholesale market in Old Delhi. Like all marketplaces in the nation, it is overcrowded and buzzing with action. One can readily purchase stuff at retail costs despite the fact that it is a wholesale marketplace. The bazaar caters to the day-to-day family needs of the consumers living in nearby, and it’s possible to buy quality and great items at half the cost compared to that of the other high-end stores and malls.

That concludes the three most popular shops in Old Delhi. Delhi is easily accessible, In many occasions, Agra is used as the gateway. You can easily cover the Agra to Delhi distance in a cab, bus, or even a train.

Hit these Spots for a Memorable Weekend Trip from Cochin